What did the English feed their cattle?

By Grace TsaiFebruary 9, 2017No Comments

After consuming a burger from the nearest fast food restaurant, little thought is given to the process beef cattle, cattle used specifically for meat production, undergo to ultimately end up on our plate. Their journey to our table begins when beef cows are approximately six months of age. At this point in time, the beef cows are then sent to confined animal feeding operations (CAFOs), also known as feedlots, where they are fed grains, particularly corn, for the remainder of their lives. This diet quickly fattens the cows up, however, it causes detrimental effects on their health seeing as they have not yet evolved to be lot fed. Instead, a ruminant’s stomach has evolved to efficiently digest grass. 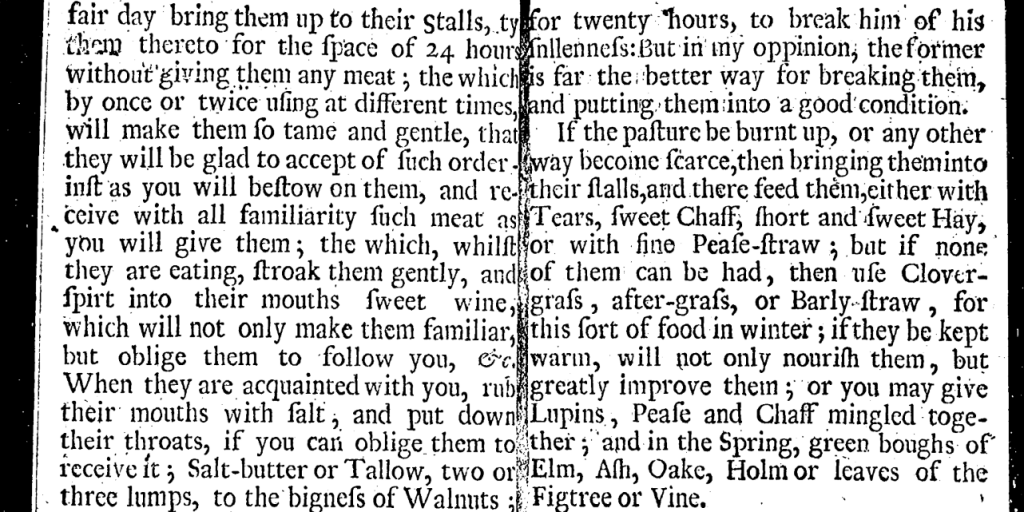 Folio from Profit and Pleasure United Or The Husbandman’s Magazene dated 1684 by John Smith, that describes what livestock were fed during the 17th century.

Numerous studies have shown that lot feeding causes beef cows to become more vulnerable to illnesses, thereby necessitating the use of antibiotics to prevent them from becoming sick. Knowing this information, what does it have to do with 17th-century cattle? To answer, identifying the food source of beef cows is essential for understanding their overall health, as well as the condition and quality of the meat that is produced from them. If English cattle during the 17th century were primarily lot fed, then this would result in more marbling, a white pattern on meat that is caused by deposits of intramuscular fat within the meat.

During the process of brining, we know that marbled beef is more susceptible to spoilage due to the extra fat. In addition, unlike today’s cattle industry, antibiotics were not used during this time period which thereby increases the likelihood of consuming meat from a diseased cow. On the other hand, beef cattle that are grass fed are generally healthier and produce leaner meat, reducing the possibility of meat spoilage. Based off our preliminary investigation, it appears that the cattle during this time period were fed a mixture of both grains and grasses. The diet of cattle mentioned in the historical accounts include sweet chaff (oak hulls), pease straw, barley straw, oats, wheat, rye, corn, rapeseed, parsnips, carrots, and even turnips. Cattle were also allowed to graze in grass filled pastures and ate several specific grasses, such as clover grass, lupins, and sweet hay. This information is not only crucial for pinpointing the nutritional content of the beef that the sailors so often consumed,  but also assists us in determining the sailors’ overall health as well.

However, as previously mentioned, this investigation is still ongoing. If conclusive evidence is found stating that the English had a preference for either lot or grass feeding, then we hope to perform isotopic analysis on the cattle bones found from Warwick to further confirm or disprove this hypothesis.