Cheers me Matey, We have Niacin!

Liquid bread, best known as beer, was a huge staple for 17th century sailors, considering they were rationed 1 gallon of beer a day. This beer is very different from the alcoholic beverage we all know today. Ships beer back then was lower in alcohol,  warm and flat, and not as hopped. Beer was drunk in a high enough dosage to cause long-term health problems, but it also added extra calories, vitamins, and minerals to a sailor’s diet. Here, we will be focusing on the niacin in beer.

Niacin, also recognized as vitamin B3, is a water soluble vitamin best known for its chief functions in the human body: being part of coenzymes NAD (nicotinamide adenine dinucleotide) and NADP (its phosphate form) used in energy metabolism. Coenzymes are like copilots, they assist enzyme functions, enabling them to synthesize compounds or dismantle compounds. Enzymes are very important in the metabolism of glucose, fat, and alcohol. NAD also plays a vital role to protect against neurological degeneration.

Diagram of how enzymes work.

It is recommended that males above the age of fourteen consume 16 mg/day of niacin. According to Starving Sailors, a compilation of articles written and edited by doctors and naval surgeons, sailors may have had niacin deficiency which was confused for scurvy and other B vitamin deficiencies, like beriberi. It’s also known that sailors suffered from petechial and perifollicular skin hemorrhages, among other skin issues. These skin conditions are potential signs of pellagra, but could also occur from other deficiencies and complications, so no one has yet been able to confirm if pellagra was truly a common shipboard occurrence.

Pellagra is characterized by the 4 D’s: dermatitis, diarrhea, dementia, and eventually death. When we break down this word we can dive deeper into the characteristics of pellagra: “pellis agra” which means rough skin in Italian. Pellagrous skin is very similar to a sunburn in the way that the flakes peel away, and typically shows up on the parts of the body exposed to the sun. Dementia is a term used to describe cognitive decline. Early cognitive decline associated with pellagra include: depression, hallucinations, tremors, dizziness, and apathy. In acute niacin deficiency, encephalopathy is found which closely resembles wernicke’s syndrome. Unfortunately, these symptoms do not help clarify if shipboard accounts of hallucinations, malaise, and skin problems were due to pellagra because similar symptoms can also be found in people with beriberi and scurvy. So, there is only one way for us to find out–by testing the foods, such as our carbs, meat, and fish — for niacin. 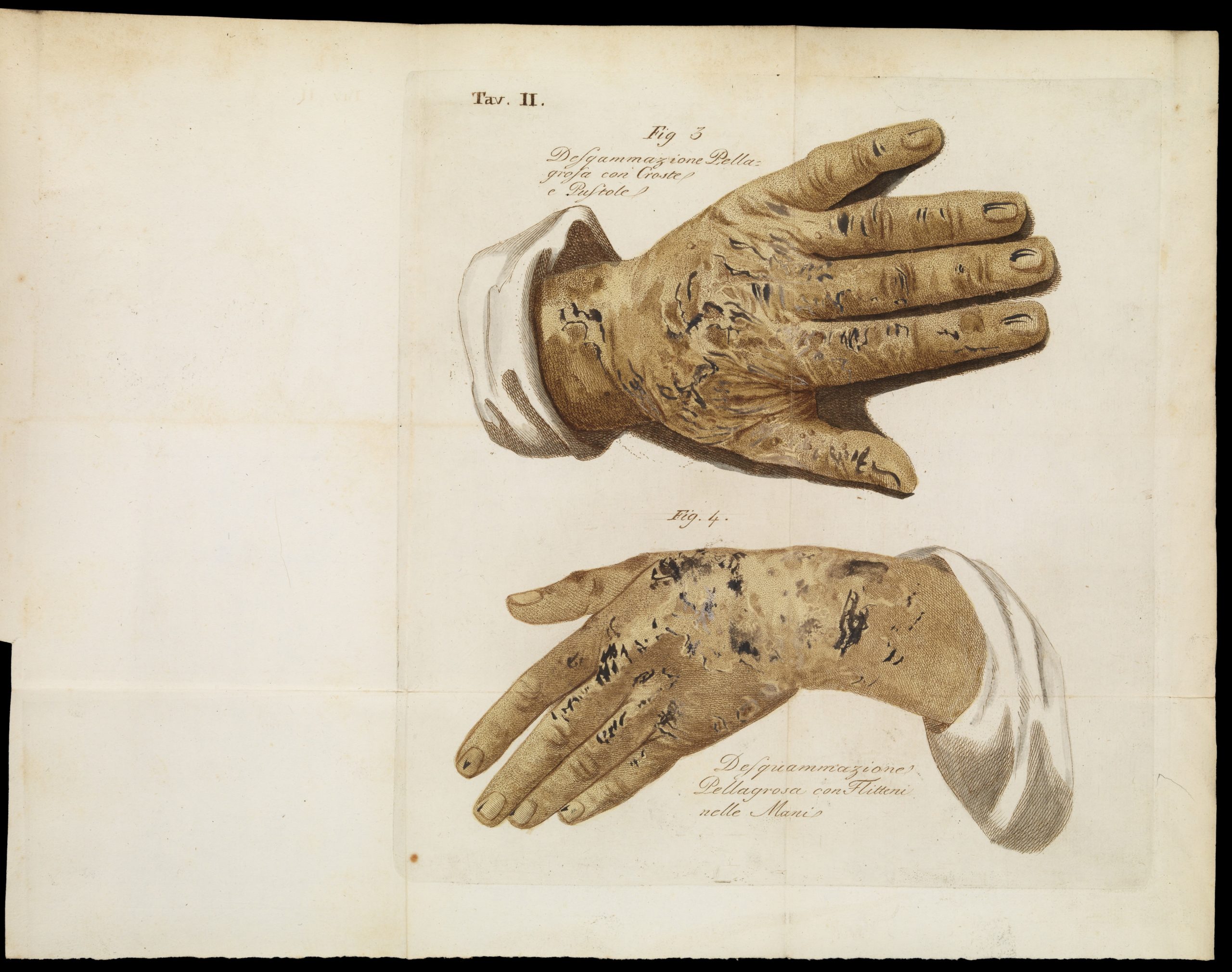 As mentioned, niacin is found in meat, fish, and whole grains. Today, grain processing methods remove the bran, husk, and germ from a grain. The germ is the portion of the grain that niacin is concentrated in. Thankfully, most sailors were not elite enough to receive food and drink made from refined grains, which although tastier, more easily digestible, and fancier, did not contain many benefits of grain, such as niacin. 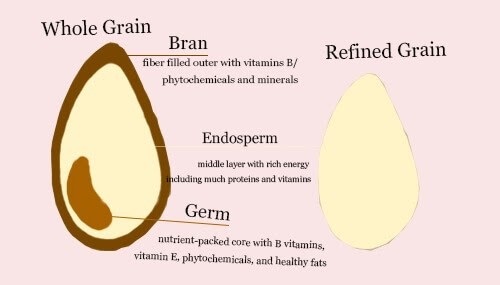 Diagram of a whole grain.

Our current research shows that sailors had a balanced diet of macronutrients. A mariner’s main sources of carbohydrates were from oatmeal, biscuits, and, of course, beer. These foods are made with whole grains and contain the much needed aleurone and germ where the niacin is concentrated in. In addition, the fermentation process from the beer yeast produces niacin.

We also didn’t expect much niacin loss in the foods because niacin is the most stable water-soluble vitamin. This is a BIG deal for niacin as B vitamins are prone to being lost during cooking. If niacin is lost during cooking it is primarily due to leaching. Leaching is when nutrients in food move out of food and into the cooking liquid. A prime example of this is when broccoli is boiled in water, the water turns green. That green water is nutrients that have left the broccoli and are now found in the water! Niacin retention is found in the range of 45-90% when looking at cooking treatments of both meat and veggies. This water soluble vitamin is TOUGH!

An example of leaching in broccoli.

Based off of the laboratory testing on our beer, sailors received 6.39 mg of niacin per day just from drinking one gallon of beer. This is only from one food source! Think about it, sailors also received niacin from beef, pork, oatmeal, and biscuits (which are awaiting niacin testing to be done). Furthermore, while 16 mg is the recommended daily amount, people can often get away with less and still be generally unaffected. Based on this information and our knowledge of niacin bioavailability, sailors probably did not have a niacin deficiency and it’s because of the beer.

Once again a big thank you to Brigadoon brewery for brewing the beer used in our research. If you’re curious to read up on on our project beer, please check out our previous blog post here.

Stay tuned to see what other exciting developments we have brewing up!